Suppose you want to find out how many times particular text or a number value occurs in a range of cells. For example:

Note: The screenshots in this topic have been taken in Excel 2016. Depending on your Excel version, the screen may appear different, but the functionality will still be the same.

There are several ways to count how often a value occurs. Examine the methods below to find what works best for you.

Use the COUNTIF function to count how many times a particular value appears in a range of cells. 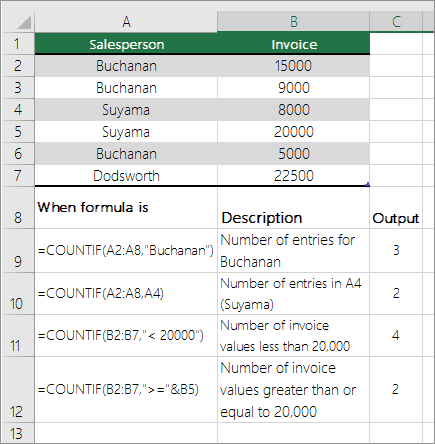 Count based on multiple criteria by using the COUNTIFS function

The COUNTIFS function is similar to the COUNTIF function with one important exception: COUNTIFS lets you apply criteria to cells across multiple ranges and counts the number of times all criteria are met. You can use up to 127 range/criteria pairs with COUNTIFS.

The syntax for COUNTIFS is: 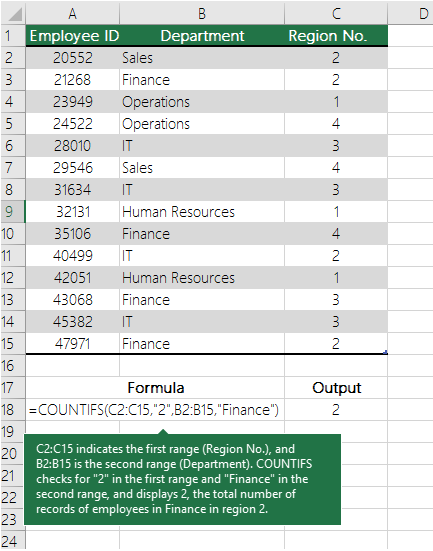 Let's say you need to determine how many salespeople sold a particular item in a certain region or you want to know how many sales over a certain value were made by a particular salesperson. You can use the IF and COUNT functions together; that is, you first use the IF function to test a condition and then, only if the result of the IF function is True, you use the COUNT function to count cells. 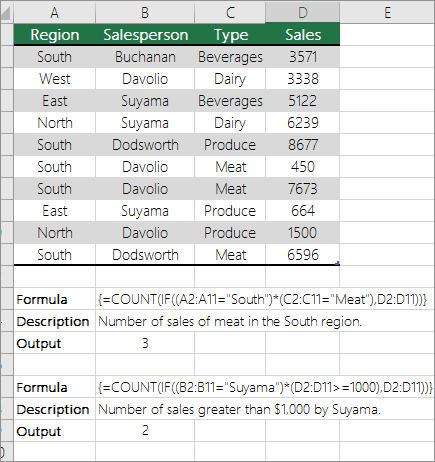 In the examples that follow, we use the IF and SUM functions together. The IF function first tests the values in some cells and then, if the result of the test is True, SUM totals those values that pass the test.

The above function says if C2:C7 contains the values Buchanan and Dodsworth, then the SUM function should display the sum of records where the condition is met. The formula finds three records for Buchanan and one for Dodsworth in the given range, and displays 4. 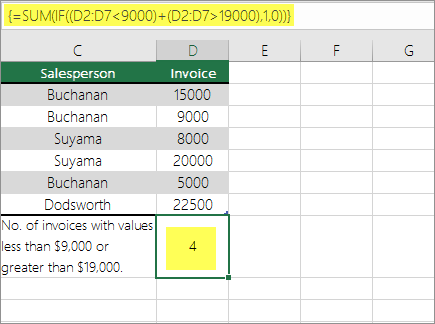 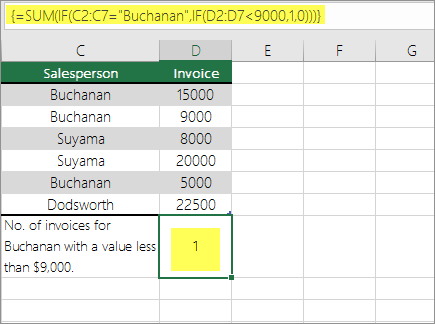 The above function says if D2:D7 has invoices for Buchanan for less than $9000, then SUM should display the sum of records where the condition is met. The formula finds that C6 meets the condition, and displays 1.

NOTE: The formulas in this example must be entered as array formulas. That means you press F2 and then press Ctrl+Shift+Enter. In earlier versions of Excel for Mac use

You can use a PivotTable report to display totals and count the occurrences of unique values. A PivotTable is an interactive way to quickly summarize large amounts of data. You can use a PivotTable to expand and collapse levels of data to focus your results and to drill down to details from the summary data for areas that are of interest to you. In addition, you can move rows to columns or columns to rows ("pivoting") to see a count of how many times a value occurs in a PivotTable. Let's look at a sample scenario of a Sales spreadsheet, where you can count how many sales values are there for Golf and Tennis for specific quarters.

If you have any questions, come by the Help Desk at Hardman & Jacobs Undergraduate Learning Center Room 105, call 646-1840, or email us at help@nmsu.edu.